Before moving onto the 2019 predictions, I feel that we should look back at Patek Philippe’s 2018 showing: 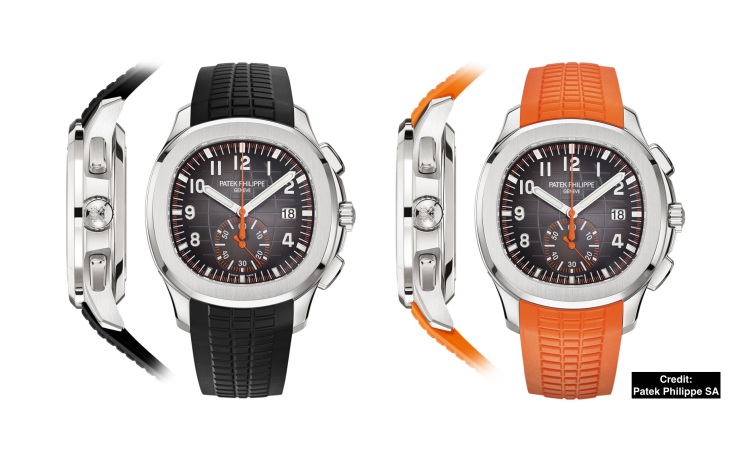 Don’t get me wrong, I’m a huge proponent of the Aquanaut while so many lean towards the Nautilus. Except for a few rare cases, I would almost always prefer to wear an Aquanaut. I enjoyed last year’s release of the 5968A-001 Aquanaut, but the amount of hype seemed too high for my liking. The increase in the overall size of the case was good and made it look and feel sportier. The shouldn’t follow this example for all of their non-chronograph Aquanauts, but if they can keep a few chronograph pieces at these dimensions in their stable then I think they have achieved a good balance. In typical Patek fashion, the MSRP (which we know almost nobody paid unless it meant being a heavy-hitting existing customer or buying at least two other hard to move pieces with it) was slightly over 40,000CHF, the watch is frequently being listed now by sellers at around the $80,000 mark. I get it, 1. it’s a Patek, 2. it’s a chronograph, 3. it’s in steel, 4. “Hey look! This is a new funky color for the company”, but still, for reasons I can’t entirely put into words, I’m getting very tired of the hype of watches I don’t feel entirely deserve it. I agree this watch deserves much more attention than the new flawed cranberry and bluish-purple colour ceramic Rolex Pepsis, but it just feels too similar for me.

Surprisingly (to me most of all), my favorite release from last year was actually the lady’s reference 7150/250R-001. It’s incredibly rare that I can find a women’s watch that I can enjoy not only the outward aesthetic, but also the inside, the soul of the watch. After first seeing this release it quickly rose up to becoming one of my favorite women’s watches ever. With so many women’s watches being dumbed-down with quartz movements, the price might be a tough pill to swallow for many who are used to buying lady’s Patek Philippe watches with quartz movements at a fraction of the price of mechanical ones, but this one is absolutely worth it. It’s a serious watch from a technical standpoint, looks very feminine and elegant, and isn’t a watch that just anyone can pull off. It takes someone of a high moral and intellectual fiber to really match this watch. Much in the same way I feel about a Lange 1 Moon Phase, an Arnold & Son HM Perpetual Moon, a Philippe Dufour Duality, there are just some watches where you can look at the watch and get an idea of the personality of the buyer.

The one part of it I didn’t like at all was the introduction of the new Twenty~4 watches. They released an incredible new women’s watch in the 7150/250R-001, and then proceeded to release some of the most boring looking women’s watches I’ve ever seen. They could have had two home runs, but instead had one big winner and a number of losers. They need to make a more appealing “entry level” women’s watch.

1. Expansion of the Aquanaut Line.

Patek will almost undoubtedly expand upon their new Aquanaut chronograph. I doubt they’d make a standard black dial (non-orange hand) version this year, but a stainless steel brown dial and a rose gold brown dial are possible. A standard black version is a possibility though for next year’s releases. Something interesting would be if Patek decides to release a version of the Aquanaut with a black, blue, or orange ceramic bezel with a white dial. Historically Aquanauts with a white dial have been made in lady’s watch sizes, but a larger sized chronograph or non-chronograph watch with a more defined bezel and a black, grey, or blue strap could make the watch much more masculine looking. I’d really like to see them release a nice blue dial for the new chronograph line. Not the terrible 5711 blue, but more like the 5168G 20th Anniversary Aquanaut’s blue. I doubt they’d do this, because it might anger buyers who waited for the 20th Anniversary Aquanaut, but at the same time we’re a few years removed from that release and this would be so different in a stainless steel chronograph form that it wouldn’t conflict as much, unlike Rolex’s issue with releasing a stainless steel blue Submariner when they currently have a white gold version available. Having the chronograph option helps the case for Patek potentially releasing a blue dial.

While I love the black dial and blue dial versions, having only two watches in a dress watch collection is a little disappointing. It’s especially disappointing when a white dial version is unavailable and the same goes for yellow gold casing. I understand Patek is wanting to make these traditionally older-style dress watches look much newer and exciting, and they have definitely done a great job with the beautiful rose gold case & black dial and platinum case & blue dial versions, but something is missing. Patek will look to release one more watch for the line which will be a Golden Ellipse featuring a white dial housed in a yellow gold case.

With so many strong competitors in the “entry-level” high-end dress watch category, it might benefit Patek to expand a bit upon their Calatrava line. I’m a big lover of Vacheron Constantin, but let’s face it: their Calatrava comparable lines aren’t exactly huge threats to Patek. The thing is though that Vacheron has made a good move in adding the Fiftysix line in addition to the entry-level watches from the Patrimony and Traditionnelle lines. Many collectors have wanted something from Vacheron at a more approachable price point that also houses an automatic movement. The collection has some more advanced complications, but overall the price-points for all the steel pieces as well as the tine & date pink gold version are all below $23,000. More importantly, the steel time & date models are priced at $11,600 with one version being available in a blue dial. I’m not a huge fan of the dial design of the Fiftysixes, but in a lot of cases if someone is presented with the option of a Patek Calatrava in white gold for around $20,000 versus an automatic Vacheron in steel with a blue dial (something that Patek doesn’t offer on current men’s Calatravas) for $11,600, it’s going to be a tough decision. Based on that I’m hoping that Patek will release a blue dial to give buyers more options and make the Calatrava a stronger option. A Patek is a Patek, so the price difference won’t necessarily scare people away, but with so many people wanting watches with blue dials Patek is losing the war without having one in the collection.

Patek has discontinued all 5170 models. The new equivalent line will be the new 5172. First thoughts? On a scale of 1-10, this gets a -10. The 5170 was perfect. What was wrong with it? The dial was beautiful, the size was great, it was an incredible watch. Now on the 5172 they’ve changed an iconic set of leaf hands to a set of ugly syringe hands. The font for the dial of the 5170 has been changed as well, with the new font making the watch more boring and not worth even looking at anymore. Quite frankly, between the dial and the new 42mm size (up from 39mm) this watch would be almost indistinguishable from a bunch of Breitling Navitimer 8 chronographs in a lineup. Patek has managed to take what was likely my favorite watch in their catalogue and turn it into a Navitimer 8. With all the talk of the possibility of Patek Philippe being sold, remember this release as being a huge indicator of current mismanagement, and partly why the company is at a point where “for sale” rumors are going around.

It looks like Patek is expanding upon their Aquanaut line, but not in the way that I had hoped (from what has been released so far at least). Patek Philippe has released the 5168G. A white gold Aquanaut with a “khaki green” (olive green) dial and strap. The green color definitely seems to look better in actual pictures rather than Patek’s renderings. Overall this release isn’t bad, but not a home-run either.

The new 5212A Weekly Calendar is a neat watch, especially for a Calatrava, but still doesn’t fill the need for more options at or below the $20,000 mark to compete with their competitors. The 5212A is my favorite release by far for 2019 and I believe will continue to grow in popularity among not only those seeking a relatively affordable cool complication, but for serious collectors as well. This release easily gets a 9/10.